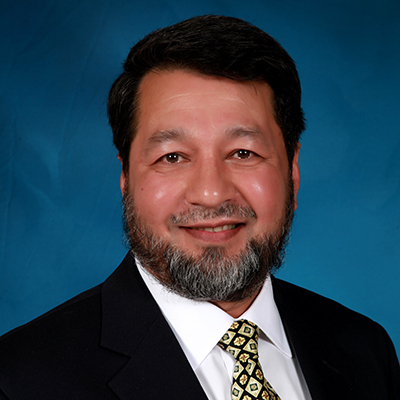 Associate Professor of Physiology
Office of SIMS: Division of Clinical Medicine and Surgery

Qamrul Choudhury, PhD, earned both his Bachelor and Master of Science degrees in Pharmacology from the University of East London, London, UK. He received his PhD from the University of London, UK (St. Barthlomew’s and the Royal London School of Medicine and Dentistry) in 2000. His PhD thesis entitled “Control of arachidonic acid release by epidermal growth factor and annexin-1 in human adenocarcinoma cells”. He was involved in research, investigating the role of eicosanoids and signaling pathways in inflammation and human lung cancer cell proliferation. He moved to the USA in 2002 as a Post-Doctoral Fellow in the division of Pulmonary Sciences and Critical Care Medicine, University of Colorado, Denver (UCD). He was investigating the signal transduction pathways of eicosanoids (prostacyclin and iloprost) in pulmonary hypertension and lung cancer. He was pursuing the genomic approaches to the study of lung cancer using both primary and cancer cell lines, transgenic mice, and microarray analysis. He then moved to the Department of Cardiothoracic Surgery, UCD as a Research Instructor. His role was to investigate the inflammatory responses to injury aftershock using animal, biochemical and molecular approaches. His last appointment was at the Medical Oncology department at UCD, where he was investigating human platelet mRNA expression profiling and clinical validation in myocardial infarction and in small lung cancer metastasis patients. Meanwhile, he was also engaged in teaching General Biology, Biochemistry, Microbiology, and Anatomy &amp; Physiology at Metro State College of Denver as an affiliate faculty member. He joined the RVU as an Assistant Professor of Physiology in June 2010. He would like to devote his career to full-time teaching and part-time research.