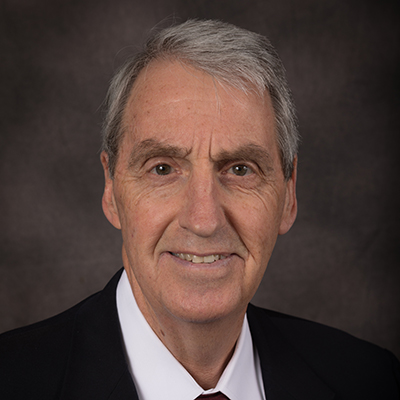 Honors and Awards
Publications and Presentations

Dr. Jensen grew up on a dairy farm in Rigby, Idaho, a small town in a medically underserved area. This early experience led him to pursue a career in which he could “return to the intermountain west to help train physicians and other healthcare professions” to mitigate the shortage. After receiving a Bachelor of Science degree in Zoology from Brigham Young University, he obtained a Master of Science degree in Physiology and a Doctor of Philosophy degree in Pharmacology from the University of North Dakota. He has taught at and/or led a number of medical institutions including Oklahoma State University College of Osteopathic Medicine and Kansas City University of Medicine and Biology.

During his career, he has held several claims-to-fame: when he was just 32 years old, he became America’s youngest medical college president; he has served as CEO for seven different colleges; and, in 1996, he was invited to enter post-Cold War Russia on a humanitarian mission, one of the first American scientists to do so. One of his proudest moments as an educator came when he helped a perpetually failing student stay in school. Years later, he received a call from the former student. “He thanked me for not giving up on him and informed me that he had been named Chief Resident in his surgical residency,” he said.

Yet despite all of his accomplishments, it was that determination as a young man to improve health care in the intermountain west that brought him to RVU. “RVU has enabled me to complete my career circle.”

He and his wife, Marteen, will celebrate 50 years of marriage next year. They have three children and eleven grandchildren. When he’s not working, Dr. Jensen enjoys running, wood/stone carving, and fly fishing (which he did professionally during college). He is currently writing three books and is pursuing research in interprofessional education and “mending the cleft that separates conventional and complementary healthcare.”