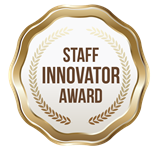 Mike has been working in the IT field since he was seventeen. “I’ve done IT related work in various capacities for more than 20 years,” he said. “I am also a filmmaker, creating short films, documentaries, commercials, and corporate videos.” In 2015, he worked as a DP and editor for a documentary that was featured in DOCUTAH in 2016.

On coming to RVU, he said, “I am happy to be in a position where both my skills in IT and my skills as a filmmaker will be valued. I love using my skills from both fields to create a compelling AV experience for our students.”

Mike is married and has eight children, “Soon to be nine, and yes, all from the same marriage!” he said. “I love animals and have two dogs, a cat, a parrot, and three rabbits.” He enjoys filmmaking, motorcycles, animals, and video games. “Basically anything electronic that makes life easier or more fun,” Mike said.

A little known fact about Mike is he has an arsenal of Nerf weapons, and likes to have Nerf wars with his kids!