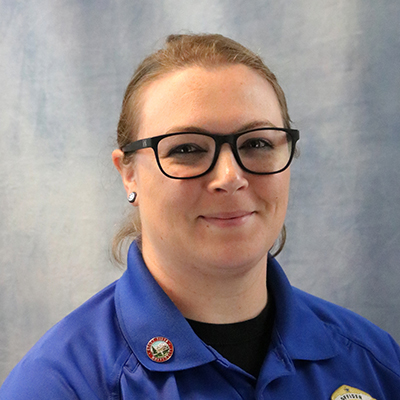 Having just moved to the Beehive State in March, Whitney and her wife, Kayla, said goodbye to the sundrenched beaches of California and hello to the endless sky and rugged beauty of Southern Utah in order to be closer to family. "Although we’ll miss Disneyland, we’re looking forward to new adventures and experiences here!" she said.

Prior to RVU, Whitney spent five years at Home Depot, most recently as a department head. After that, she moved on to the Kern Medical Facility (a Level IV Trauma facility) in Bakersfield, California, where she worked as a Security Supervisor. She is excited for the change of scenery (both at RVUCOM-SU and in her new home of Hurricane). "In some ways, it's the same as my previous job; in other ways, it's completely different." She loves learning new things about her field and challenge that brings.

The oldest of five children, Whitney enjoys spending time with her six nieces and nephews (with a seventh on the way!). Now that she has fully settled into her Utah life, she’s excited to explore the national parks and to hike with their 11-year-old dog, Clyde. She’s also a self-professed nerd.

When she’s not reading Harry Potter or Richelle Mead books, she’s watching Star Wars and Marvel films. “Captain America is my favorite Avenger,” she said. Whitney is also a cancer survivor. "In August 2010, I was diagnosed with Non-Hodgkin's Lymphoma," she explained. "By February 2011, I was in remission and have been cancer-free ever since."